A subsea pipeline restriction, at a water depth of 100 metres, was impacting on production to the extent that a North Sea producer was losing thousands of barrels of oil per day.

The potential for wax deposition had been unaccounted for at the design stage, due to the mismanagement of samples and analysis, and noticeable quantities were accumulating in the flowline. Without representative samples, remediation methods failed to alleviate the problem with costs running into millions of dollars for pumping chemical treatments via an intervention vessel. 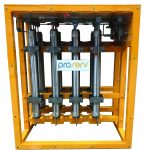 Proserv was approached by the operator with a request to provide a system that allowed for the safe capture and containment of subsea samples taken from a flowing well at 1,000psi.

The samples needed to be upstream of the restriction to ensure they were as representative as possible of the fluid chemistry entering the pipeline. A diver operated sampling system qualified for use in harsh subsea environments was supplied that could take up to 12 litres of sample per run.

The system had the following features and benefits

This ability to subsea sample saved the operator millions of dollars in well intervention and workover costs that would have been required to obtain a representative sample of the reservoir fluids.

Looking for something specific?

Search our website below and get more information
© 2023 Gilmore | Designed & Developed by mtc.